The American Center for New Works Development (ACNWD) at Seagle Music Colony was officially introduced to the public in 2017 with the piano-vocal premiere of Herschel Garfein’s Rosencrantz and Guildenstern are Dead and the workshop of Zach Redler and Jerre Dye’s chamber opera The Falling and the Rising. (We originally mentioned it back in October with our Summer 2017 Season recap.) 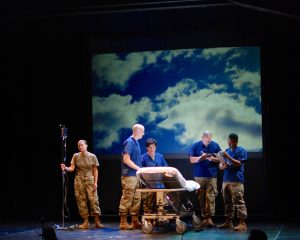 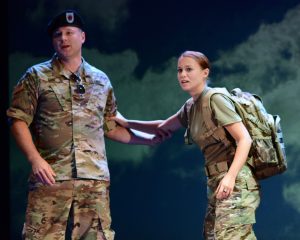 Part of the inspiration for this project came from a desire within SMC leadership to utilize the Colony property and resources during the months before and after the summer season, as well as to contribute significantly to the expanding world of new compositions. American opera companies are introducing more new works each season, but each new work had to start somewhere – and that’s where SMC spotted its niche.

“So what is a workshop?”

After a new work has been conceived and composed, its creators need to hear and see what they’ve written down onstage. This process allows them to fine-tune music and text, solve dramatic plot holes, and streamline the overall project with the observation and advice of artistic experts not associated with the project’s inception, including stage directors, opera company administrators, conductors, and of course, singers. A workshop is just that – a place where a work can be observed, refined, and burnished into a finished product that is ready to be shared with an eager public. Seagle Music Colony, with its multiple performance and rehearsal spaces and rustic natural location far from the disruption of city life, is uniquely suited to host these workshops.

The long-term goals of the ACNWD are threefold:

Just a few of the projects SMC will undertake or has proposed for 2018 include:

You may notice a trend in these projects in that several are awaiting some form of funding. New projects are exciting endeavors, but they require some upfront investment before they can delight and entertain the public through live production. It is a challenge that many of our artists may recognize: one needs to be established to gain the confidence of investors or employers, but this establishment is primarily achieved through producing work that can be shown as evidence of a project’s worth and/or benefit. To that end, self-production has been the name of the game for the young ACNWD’s initial projects. There is a lower net income from this approach, but it demonstrates the project’s track record. Meanwhile, Darren Woods has been tireless in his efforts to plumb his new music connections in getting the word out about ACNWD. He attended the New Works Forum in New York this January, where he spoke with numerous potential participants and distributed the ACNWD Brochure. He continues to meet with investors, grantors, and opera creators to drum up interest and support.

We can’t overstate how energized we are about seeing the Colony grow into an intrepid, innovative presence within the greater artistic community. To see how you can contribute, or to request additional information, reach out to Darren or Tony directly. In the meantime, stay warm out there, and consider going out and enjoying new works in your area. Every classic we now know and love was once a “new work” – wouldn’t it be an incredible part of your personal legacy to support these future classics from the get-go? And if you happen to see a good one, tell us about it on Facebook or Instagram!